The beginnings of falconry can be dated to 4000 b.c. The former inhabitants of middle-east steppes started to use the birds of prey for hunting back then. Those animals could fly further and faster than any spear or arrow and in the open fields with little obstacles in the way, and thus were ideal helpers.

There are rare mentions of falconry found on tombstones in India, dated to the first half of second millenium. By certain theories this was a time when nations from russian and kazakhstan steppes started to cross the mountains and inhabit the area.
We don’t have very precise mentions about falconry in antics, but there is a mention about Odysseus bringing a few falcons from his long journeys.

Such birds were very important in ancient Egypt though. Not used for hunting, but praised for their traits, such as bravery, speed and ability to hunt down their prey. They were considered a god-like creatures. Even for that reason, one of the egyptian gods, Horus, took an appearance of a falcon. In the mythology, it is told that he won over the god Seth and unified people of Low and High regions and became the first egyptian Pharaoh.

In the middle Europe, the falconry appeared with the “migration of nations”, in 4th and 5th century when the Huns invaded. The birds of prey started to appear at manors of nobility roughly two centuries after that. There, their purpose isn’t hunting for food on daily basis, but as a free time occupation and also as a sign of top class lifestyle.

In the middle Europe, the falconry appeared with the “migration of nations”, in 4th and 5th century when the Huns invaded. The birds of prey started to appear at manors of nobility roughly two centuries after that. There, their purpose isn’t hunting for food on daily basis, but as a free time occupation and also as a sign of top class lifestyle.

A great upkeep of falconry is dated around 800 a.c. in times of Charles the Great, who also wrote one of the first falconry laws. For example, it stated the penalty for killing or stealing the trained hawks – which turned to be a very pricey goods. By gifting a hawk, a war conflict or political crisis could be sorted out or avoided. Even the church ministers enjoyed to practise falconry, though they were forbidden to do so. Nevertheless they often did it anyway – in secrecy.

The greatest era of falconry in the Europe was in 13th and 14th century. The knights returning from the Crusade brought new insights to falconry from their journeys to the middle east. Hawks started to be bred in noble manors in big numbers and they had their own keepers, whom were given more rights than common people in return. The nobility prized their animal companions so much they took the hawks into their houses, kept them nearby on their travels, wars and even took them to church ceremonies. Amongst Czech kings Přemysl Otakar II. has been a devoted falconer. His favorite hunting region was at Poděbrady region where he founded a whole village specially for the members of royal falconry. To this day, the town is known as Sokoleč.

Another passionate falconer was the emperor Fridrich II. who wrote a tract “Of the nature of hawks and the art of hunting” which is one of the very first books in the world about ornitology, focused on birds of prey. It is from this book where this quote comes “Falconry should be recognized as an art, because it is the only sophisticated way of hunting, which by it’s very nature is actual art. Other animals can be forced by a strong hand and other means by man – but a bird who sails the sky can be tamed and trained only by the man’s spirit. It is a triumph of man’s spirit over the beast that is the most free of them all. Over a hawk, who returns to the man after being released, even though it is against his nature. Not because he despises freedom that was given to him, but because he’s chained by the invisible bound of man’s genius.”

The golden days of falconry died with the development of firearms and with the fashion of fox hunting. The falconry nearly disappeared in most of the european countries through the 18th century, the United Kingdoms left as the last bastion of this hobby, where it remained as a part of tradition. One of the first attempts of renewal took place in Netherlands in 1840, where the Royal huntsman club was founded, but the real renewal had to wait till 20th century. A Club of German falconers was founded in 1923 in Leipzig. After that, in second half of the century, more such organizations emerged at the old continent and across the sea. A count Bedřich Mensdorff-Pouillz of Chotělice was a dedicated falconer who popularized falconry in the Czech republic and brought it to attention by sophisticated articles for a magazine Stráž myslivosti. 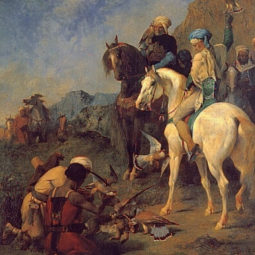